Is Widening of Islamabad Expressway a Solution to Twin Cities ‘Congestion Problem’?

Is Widening of Islamabad Expressway a Solution to Twin Cities ‘Congestion Problem’?

Today I got ten minutes late from my daily routine. While taking the car out of porch these words were echoing in my ears ‘now you will face a lot of congestion on the highway”. It made me wander if highway and design standards in Pakistan relate only to you being ahead of time?? Being punctual is no doubt a virtue, but being unfortunate once in while shouldn’t be this much of punishment. The entire stretch from Pak PWD Housing Society to Airport Chowk was choked. Owing to the undulating topography I could see a long stream of traffic right in front of me. It took me good 25 minutes to cross this 3.5 km length.

Congestion, they call it. If anyone wants to experience it in twin cities please ride on the highway in the morning and evening peak hours. It took me exactly 85 minutes to complete my 22 km journey to work place from Pak PWD Housing Society to G-5/2, with an average speed of hardly 20 km/hr. Recently, construction works have started for widening of the Islamabad Highway. The ambitious project covers widening and improvement of the entire length (24 km) from Zero Point to Rawat into a 10 Lane Signal Free Corridor. It includes construction of interchanges underpasses and overhead bridges at different crossings throughout the length. According to CDA spokesperson, as spread in the news, the project is to be executed in three phases with a cost of Rs. 21.81 Billion. The first phase, portion of expressway between Zero Point and Faizabad interchange would be widened to 10 lanes. Then the stretch between Faizabad and Airport Chowk, and lastly from Airport Chowk to Rawat. Project involves construction of two overhead passages and seven underpasses, five lanes on either side, three flexible and two rigid for movement of heavy vehicles.

The question here is whether we are aiming to solve the congestion problem or just distributing it to other links? As the corridor from Zero Point to Airport Chowk becomes signal free zone, travelling at a speed of say 80 km per hour at this 12 km stretch would take hardly 10-15 minutes to pass through. The traffic load will reach both ends in minutes creating and transferring the congestion on abiding roads. The case of congestion experienced in morning peak hour at faizabad is a current yet classic example of the phenomena. The bliss of Bus Rapid Transit in Rawalpindi has made Murree Road a signal free corridor uptill faizabad interchange. Traffic from Rawalpindi at morning peak hour reaches the Faizabad Interchange in minutes and converges into the highway peak creating a bottleneck.

The planned sequence has the potential of creating congestion instead of resolving the problem. The Phase-III of project that is Airport Chowk to Rawat should have been improved at first, to be able to absorb the traffic loads after overall improvement. Being a daily traveller from Pak PWD to G & F Sectors for good seven years, I feel the most constrained portion of the entire length is from Airport Chowk (Koral Chowk) to up till PWD/Bahria Town Entrance U-Turn. The irony of the whole conceived project is selection of this portion as the last leg. That would become a reality provided the financially constrained CDA reaches that far, if of course the federal government lasts. The Lethrar Road, the road section from Khana Pul to Taramari Chowk is already quite strained with traffic load. With the construction activities on Expressway, the traffic loads automatically increased on this leg. Lethrar Road crosses Gumrah Khas and the bridge is cracked and is not in useable condition. The traffic flowing from Khana Pul towards Taramari Chowk is forced to go wrong way on one side of bridge in vulnerable circumstances. This already hazardous situation is faced faced with increased loads of traffic, creating all the more possibility of God forbid, a deadly collapse. Point to ponder here is whether the econometrics of time travel savings at Expressway, of course with spending Rs. 21 Billion, more valuable than the very lives endangered today and in days to come. In addition to Lethrar Raod, I see 7th, 8th & 9th Avenue, Best Western Chowki/Barrier and already congested Serena Hotel experiencing all the more rush. This shall lead to valuable losses in terms of travel time; vehicle operating costs; safety costs; and adverse environmental, social and psychological impacts. The need of the hour is indeed to take inspiration from exemplary Bus Rapid Transit facilities planned and executed indigenously in financially constrained economies like Curitiba and Rio de Janeiro, Brazil. No Mass Transit Facility on this the busiest Islamabad Expressway, the mere absence of a Traffic Master Plan, in advance of such mega projects, and Bad Traffic Engineering & Management on part of city managers and facilitators will impair the benefits conceived from this project. Doing iconic projects in isolation does not solve the traffic problems at hand, instead shifts them temporarily to feeder roads creating ‘congestion’ in surrounding areas, noticed within days but sadly after execution. 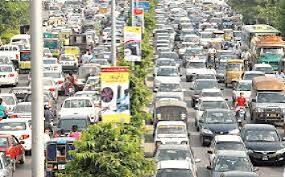